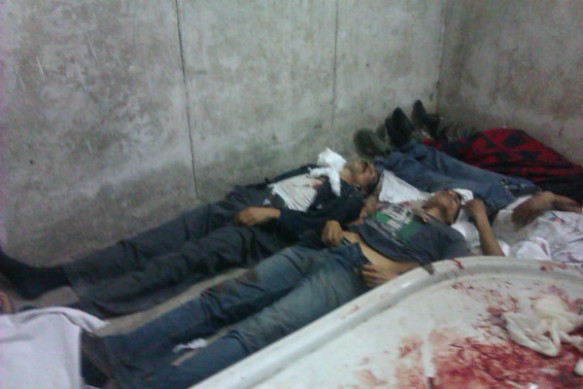 Corpses from the Cairo violence: from @alaa, http://twitpic.com/6y12bc: خلص الكلام

A Coptic protester offers his story of the army inciting violence at Maspero today. Read it all. Some key parts:

I began to walk back towards Hilton Ramsis, and suddenly 5 vehicles full of CSF soldiers [Central Security Forces or Amn el-Merkazi, a paramilitary police force] showed up. People began to pelt them with rocks, destroying the wind shields, and the causing the drivers of the vehicles to panic, thereby hitting into each other and the sides of the road. I and some other people were trying to calm people down into not attacking the vehicles but the people were angry.

At that point, I was alone, and so I began to walk back to Tahrir.  … Someone saw me tweeting and came to me. He asked my name and so I said Hani Sobhi, he then grabbed my wrists to see if I had a cross tattoo, and when he did not find it, he asked for my full name. I said Hani Sobhi Bushra. He asked if I was a Muslim or a Christian, and I said that I was a Christian.

At that point he began to scream for others that he caught a Christian, and people began to gather. … At that point there was about 30 people around me, with some of them punching me on my head.  I began to walk quickly to the cordon of the police that I had just came from. …

We reached the officer (rank of general), and the first thing that I did was to show him my U.S. passport and told him that I am now under his protection. I told him that I was attacked because I was a Christian. One of the men who is a policeman but wearing civilian clothing began to talk to the general that I was a Christian and that I institigated [sic] the mob to attack me and that I am carrying weapons in my bag. … This policeman in the civilian clothing seemed to be the coordinator between the mob and the police. …

As I was talking to the general, a group of policemen were around me, one of them was behind me poking my butthole with his stick. I turned around and said that if you want to fuck me in the ass, you should be man enough to fuck me in public. At that point the policeman in civilian clothing who had earlier clashed with me called me a liar, and the general once again told him to shut up. …

I mentioned that I was a Christian being attacked by a mob, and the officers told me that I should not mention that I am a Christian because they may not be able to protect me. This was in the midst of at least 400 members of the police! At that point, I was assigned two handlers to stay with me at all times.

I stayed with the CSF units and observed the following:

1) Four bodies in the lobby of an apartment building that the Egyptian ambulances could not carry because the blood was everywhere and because some of the bodies were in pieces. When I asked my CSF companions (we had became friends) about the bodies, they told me it was three Christians and one Muslim shot by the army and driven over using a humvee (yep, my tax dollars in action, btw, the U.S. gives two billion dollars a year as aid to the Egyptian military).

2) The members of the CSF were armed with live ammunition, and the order was given in front of me.

3) One of the CSF companions told me that he beat senseless a Christian man he arrested because it was said that this man was carrying a gun and shooting the people.

4) The army and not the police were the ones attacking the protestors. In fact, the police was not doing anything.

I was there for about two hours, and then suddenly a mob came to the police saying “Christians where are you, Islam is here”. They were not stopped by anyone but cheered by army units that were parked by the CSF cordon.

I used the confusion with this mob arriving and walked away from my handlers, towards Tahrir. I reached the Kasr El Dobra church, and there I saw another Muslim mob chanting “Christians where are you, Islam is here”. What shocked me is that an army officer with a rank of Lieutenant Colonel was organizing these mobs telling them that they should be the first line of defense and they will stand behind them.