Many years ago, I decided never to take an interest in the sex lives of people more famous than myself. This came after hanging out with some famous people and some not so famous people, and noticing that all the excitement lay with the latter.   Anal sex with one of the stars of American Gigolo, as described to me by a friend in excruciating detail, was not nearly as innovative or arousing as the mute inglorious milkings available every night in the refreshing anonymity of the rushes in the Back Bay Fens. As of now, there are something like six billion people in the world, and 5,999,999,999 of them are more famous than I am.   The boost to my mental concentration that derives from ignoring all their sex lives is considerable.

Nixon, partner Rojo Caliente, and child: Perfect, but not by choice

Still, there’s Cynthia Nixon.   Which one did she play on TV?  I confess, I can’t even remember. Oh, Sex and the City, that hootchy-kootchy halftime show from ancient times! —when  I caught five minutes of a rerun in a hotel last month, it seemed as dated as Baroque opera. But that doesn’t stop her from continuing to be a celebrity, and most people really do care about celebrities’ sex lives. And so most everybody noticed when she told the New York Times:

“I gave a speech recently, an empowerment speech to a gay audience, and it included the line ‘I’ve been straight and I’ve been gay, and gay is better.’ And they tried to get me to change it, because they said it implies that homosexuality can be a choice. And for me, it is a choice. I understand that for many people it’s not, but for me it’s a choice, and you don’t get to define my gayness for me. A certain section of our community is very concerned that it not be seen as a choice, because if it’s a choice, then we could opt out. I say it doesn’t matter if we flew here or we swam here, it matters that we are here and we are one group and let us stop trying to make a litmus test for who is considered gay and who is not. … Why can’t it be a choice? Why is that any less legitimate? It seems we’re just ceding this point to bigots who are demanding it, and I don’t think that they should define the terms of the debate. I also feel like people think I was walking around in a cloud and didn’t realize I was gay, which I find really offensive.”

The hue and cry over what you can say about your own kind has been almost as bad as what Hannah Arendt stirred up.  John Aravosis told Nixon she didn’t understand herself. First off, she’s wrong about who she is:  “What she means is that she’s bisexual, and doesn’t quite get that most people aren’t able to have sexual romantic relationships with both men and women because they’re just not into both genders.” But moreover, she doesn’t experience sexuality the way she thinks she does:

It’s not a “choice,” unless you consider my opting to date a guy with brown hair versus a guy with blonde hair a “choice.” It’s only a choice among flavors I already like … [S]o please don’t tell people that you are gay, and that gay people can “choose” their sexual orientation, i.e., will it out of nowhere.  Because they can’t.  And when you tell the NYT they can, you do tremendous damage to our civil rights effort.  … [E]verything you say can and will be used against you by the gay-haters.  And when you say things like this, using incendiary buzzwords that don’t really mean what you’re trying to say – when you try to define the rest of us by your incredibly poorly chosen, and incorrect, words – you hurt us all. This was an incredibly irresponsible interview.

Is anyone else here thinking maybe Cynthia Nixon isn’t really gay? Like maybe she’s bisexual, or gay-until-retirement, or gay-until-Ryan-Gosling-calls? …  statement pissed off a lot of gay people, and not just because being gay is NOT a choice for most of them. Years of talking with gay friends over the years have taught me something important: language matters. Gay, queer, bi, whatever — people have some pretty strong opinions about what those words all mean. And Cynthia could have been more sensitive with her language.

There’s an unlovely looniness here. First of all, no one should be forced to surrender their personal identity to political obligation. That’s the antithesis of a liberal society, and has nothing to do with any campaign for human rights. Second, no one has the right to decide or define anybody else’s sexuality for them — to select, for God’s sake, what you can say about yourself. The claim that a blogger who’s never even seen Cynthia Nixon (except in her TV role as a heterosexual) can determine who she is and how she can describe herself is simply silly. But it can also be as malignant as the idea that an activist in London can intuit, and inscribe in stone, the identities of a couple of teenagers in far-off Iran, a place he’s never seen or visited. I’ve written about this kind of gay imperialism extensively. In the US, it’s simply rude and repressive. Practiced elsewhere, it can kill.

The problem is that, in the US, we — the LGBT movement — have staked all our rights claims on the analogy with race. We are a people; we have our own culture and history, even though the categories that define us (so we contend) don’t; and, most importantly, our selves, like our skin colors, cannot change.   Sexual orientation is something deep, unalterable, basic. It’s because it’s unchangeable that discrimination predicated on it is so wrong. And so we’re not defending people’s freedom; we’re defending their imprisonment in themselves. The argument goes: It’s bad enough not having any autonomy over the intimate aspects of your life. Do the state and society have to punish you for that too?

It’s when people try to escape that prison, even for a day’s parole, that we treat them as traitors to the cause. 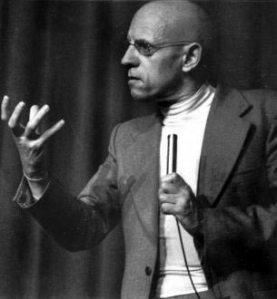 Of course, this kind of argument is absurd — even about race. It ignores the innumerable historical experiences of “passing,” the different ways that white as well as black people have been defined, the differences in race’s definition around the world — the US conception is incommensurate with the Brazilian, for instance — the fact that the Irish were treated as a “race” in the early 19th century, and many more. To say this isn’t to deny the reality of race as a basis for injustice and a predicate for social division. But to treat it as an absolute fact, an ontological canyon separating some from others, is to ignore its history. Similarly, supposing “sexual orientation” is unchangeable ignores the fact that the category itself has changed since it was invented, and that it was only invented a hundred years or so ago.  Sexuality, as Foucault grasped, doesn’t reveal some “truth” about us. (Even if it did, Aravosis would hardly be in a position to diagnose Nixon’s.)  It reveals our shifting place in society; it’s made of ideas, dreams, opinions, not absolutes.

Of course, Nixon made it rather worse by explaining in another interview:

The thing is, though (and yes, I note how her own identity has shifted here), she’s right.   In the politics of identity, bisexuals are hated because they stand for choice. The game is set up so as to exclude the middle; bisexuals get squeezed out. in the “LGBT” word, the “B” is silent.  John Aravosis, for instance, says that if you’re into both genders, “that’s fine” — great! — but “most people” aren’t.  First off, that rather defies Freud and the theory of universal infantile bisexuality.   But never mind that. The business of “outing,” of which Aravosis has been an eloquent proponent, also revolves around the excluded middle.  It’s not a matter of what you think of outing’s ethics, on which there’s plenty of debate. It’s that the underlying presumption is that one gay sex act makes you “gay” — not errant, not bisexual, not confused or questioning: gay, gay, gay. I saw you in that bathroom, for God’s sake! You’re named for life!  It’s also that the stigma goes one way only: a lifetime of heterosexual sex acts can’t make up for that one, illicit, overpowering pleasure.  As I’ve argued, this both corresponds to our own buried sense, as gays, that it is a stigma, and gives us perverse power. In the scissors, paper, rock game of sexuality, gay is a hand grenade. It beats them all.

And this fundamentalism infects other ways of thinking about sexuality, too. Salon today carries an article about multiple sex-and-love partners: “The right wants to use the ‘slippery slope’ of polyamory to discredit gay marriage. Here’s how to stop them.”  I’ll leave you to study the author’s solution.  He doesn’t want to disrespect the polyamorists:

I reject the tactic of distinguishing the good gays from the “bad” poly people. Further marginalizing the marginalized is just the wrong trajectory for any liberation movement to take.

That’s true — although whether we’re still really a liberation movement, when we deny the liberty of self-description, is a bit doubtful. But he goes on, contemplating how polyamory might in future be added to the roster of rights:

Really, there are a host of questions that arise in the case of polyamory to which we just don’t know the answer. Is polyamory like sexual orientation, a deep trait felt to be at the core of one’s being? Would a polyamorous person feel as incomplete without multiple partners as a lesbian or gay person might feel without one? How many “truly polyamorous” people are there?

Well, what if it’s not?  What if you just choose to be polyamorous?  God, how horrible!  You beast!  What can be done for the poor things? Should some researcher start looking for a gene for polyamory, so it can finally become respectable, not as a practice, but as an inescapable doom?   (I shudder to think there’s one gene I might share with Newt Gingrich.)

What, moreover, if sexual orientation itself is not “a deep trait felt to be at the core of one’s being,” one that people miraculously started feeling in 1869, when the word “homosexual” was coined?  What if it’s sometimes that, sometimes a transient desire, sometimes a segment of growth or adolescent exploration, sometimes a recourse from the isolations of middle age, sometimes a Saturday night lark, sometimes a years-long passion?   What if some people really do experience it as … a choice?

What if our model for defending LGBT people’s rights were not race, but religion? What if we claimed our identities were not something impossible to change, but a decision so profoundly a part of one’s elected and constructed selfhood that one should never be forced to change it?

Now I have damaged the LGBT rights movement. I’m sorry, but you know, I didn’t really have a choice. The Devil made me do it, as Flip Wilson used to say. We’ll see how that argument washes in defending me against my fellow activists, as well as against the missionaries of Westboro Baptist Church — who surely must understand that when the Devil grabs either your argument or your genitalia, it’s hard to make him let go.

15 thoughts on “Cynthia Nixon, Joseph Massad, and not being an American gigolo”

Leave a Reply to A Silent Observer Cancel reply