Iranian authorities killed Makwan Mouloudzadeh on December 5, 2007.  Six months earlier, a court had convicted Mouloudzadeh —  a youth of Kurdish descent from near Kermanshah — of raping three other boys when he was 13.  However, his accusers retracted their claims; no evidence against him remained. In November, Iran’s chief justice had overturned the death sentence. Yet a panel of judges illegally defied him; they ordered the execution to go forward. Makwan was 21 years old.

“Hier ist kein warum,” an SS officer in Auschwitz told Primo Levi: “Here there’s no ‘why.” Try finding the “why” in Iran’s criminal justice system, riddled with corruption, incompetence and contradictions that unravel the basic rationality and syntax intended to constitute the law! If the mullahs behaved inscrutably, though, you have to grasp the matching weirdness in the deranged behavior of Western gay activists, who had mounted a massive campaign on Makwan’s behalf. Their goal wasn’t to persuade Iran’s authorities of Makwan’s evident innocence; it was to convince them he was guilty of a different crime. They accused him of consensual homosexual sex — which is also a capital offense.

They all wanted a “gay” victim, even if it meant his death. Peter Tatchell, the British activist, had been obsessed for years with proving that “gay” executions were a regular event in Iran. He seized on Makwan’s case as evidence, broadcasting that he was the “latest victim in Iran’s on-going homophobic campaign.”  He referred to the 13-year old, who had recanted any claim of rape or other sexual relations, as Makwan’s “partner”: and he urged letters to Iran’s government, calling for Makwan’s release while further incriminating him.  Meanwhile, EveryOne Group, a rogue Italian circle of publicity hounds, organized a petition to Ahmadeinejad for the “young homosexual Makvan,” and argued explicitly that he was “‘guilty’ of having loved a peer when he was 13 and having sexual intercourse with him.”  Not a shred of evidence underpinned these fantasies of erotic culpability. But God knows how many messages Everyone Group showered on Teheran, all telling the authorities, completely falsely, that Makwan had committed a capital crime. It’s impossible to suppose these didn’t play their part in the judges’ sudden reversal, and the execution. Makwan’s self-appointed “friends” had blood on their hands.

You know the cliches. Those who don’t remember the past …. And, of course, History repeats itself … “The first time as tragedy, the second time as farce,” that was what Marx said, right? Except what if both times, it’s tragedy?  What if it’s just a grinding recurrence of the same mistakes? Not even laughing gas could let you find comedy in the senseless reiteration, the stupid waste.

Everything old is new again; and the same people are still looking for “gay” victims, and still indifferent to the consequences.

Here’s the story. On Saturday, May 12 (that’s 23 Ordibehesht, 1391, in the Persian calendar) the website of Human Rights Activists News Agency (HRANA), an independent Farsi source for rights news, published the following note:

The sentence of death against four citizens in the province of Kohgiluyeh on charges of “sodomy”  has been confirmed.

HRANA, a news organization for human rights activists in Iran, reports that  the execution of four people named Saadat Arafi, Vahid Akbari, Javid Akbar and Houshmand Akbari has been approved.

These four persons residing in the city of Charam in Kohgiluyeh province, are facing charges of sodomy punishable by death. The charge of sodomy  is an accusation often referring to sex with [persons of the] same sex.

This is very little information, and the last sentence indicates that HRANA itself didn’t know the substance of the charges — whether they involved consensual sex or rape, both of which can be included under lavat (sodomy) in Iranian law.  HRANA is the only source we have; no independent account seems to turn up in any other Iranian news organ, at least not online. It’s not on the local Kogiluyeh websites, here or here or here; it’s not even on the helpful page of the province’s religious police.

That doesn’t mean it isn’t true — but it does mean HRANA’s information is probably pretty fragmentary. Charam is a small city (population 12,000 in the 2006 census) in the out-of-the-way and mountainous Kohgiluyeh and Boyer-Ahmad province in Iran’s southeast. Even HRANA doesn’t seem to draw a whole lot of news from there, judging from their website.

So the first thing a human rights activist or a journalist would do is try to reach HRANA and get more information. The real human rights activists are trying this (and I too wrote to HRANA today). Unfortunately, there are also journalists who have learned in the Doug Ireland school that speculation is what makes a story.

The HRANA piece was posted to a listserve I’m on, that same Saturday. Dan Littauer, of the dubious website Gay Middle East, is on the same list. Within a few hours he’d written a lengthy article, which was up on three British gay news sites. (The alacrity with which these articles blossom on the Web suggests a certain sparsity of fact-checking.) The piece is an educational example; it reveals how to pad out the virtual absence of detail in the HRANA piece with other non-details, until it looks like you actually know something. Naturally, Littauer didn’t reach HRANA itself; but he quotes an unnamed gay activist in Iran, as well as Iranians in London and Austria, none of whom have any direct knowledge of the case. One says, “this is the most clear statement against same sex-acts in past months.” Another: “The rhetoric of announcement makes the link between same-sex sexual activity, or sodomy with corporal punishment very clear.” I don’t quite know what the last sentence means; but of course, we don’t have any official “announcement” or “statement” to judge from. We have only the blip from HRANA, in HRANA’s own words. It’s hard to read a new government stance into that.

Then, to fill space, Littauer indulges his own Orientalist speculation:

Iranian Human Rights activists constantly note the fact that the two genders are strictly segregated increases the tendency for same-sex acts among the youth, in a phenomena [sic] that is also similarly known in single gender prisons. Indeed this phenomenon happens throughout highly segregated societies in the Middle East and North Africa.

Now, I’ve never heard an Iranian human rights activist say anything of the sort. I have, however, heard plenty of white gay tourists, plumped up with their own fanciful sex scenarios about endlessly available Middle Eastern men, offer up just this account. What this has to do with the skeletal story from Kohgiluyeh and Boyer-Ahmad is anybody’s guess. But rule one in the Doug Ireland school of journalism is, Remember, Westerners’ fantasies are your audience. And rule two is, Every added paragraph makes it seem more true. 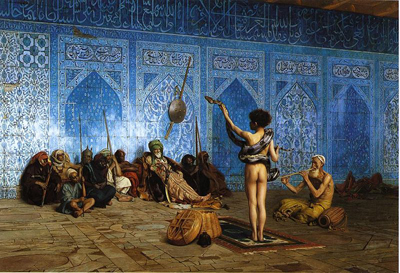 the awful consequences of gender segregation

But the sad part is what happens then. Over the weekend, some other websites start carrying the tale. “Iran to Execute Four Gays by Hanging,” one right-wing page serves up, complete with ideological icing: “It is very rare that liberal media cover Islamic hatred towards gays, or killing of gays.” Well, actually, they do.  Monday the wildly popular US-based Huffington Post  picks up the story, headlining it “Iranian Gay Men To Be Hanged For Sodomy: Report.” But: what? What, even in Littauer’s article, suggested the men were “gay”? Does HuffPo have any proof they were even guilty of sodomy, or any other form of sex? Do its editors repose such doelike trust in the Islamic Republic’s justice, such faith in its forensic uncovering of truth, that they can’t imagine the poor men’s innocence? That’s the liberal media for you.

Pretty soon it’s all over the web. The Advocate blares “Breaking News”: “Four Gay Men to Be Hanged in Iran for Sodomy.” (It’s listed under Crime, because after all, they’re guilty.) Philadelphia’s gay magazine muses on “Life, Death, and Being Gay in Iran”:  “How do you save four men sentenced to hanging for sodomy?” Not by calling them “gay,” for starters.

None of this would matter much — the Iranian authorities probably aren’t fans of the Advocate, or even Arianna Huffington. But invisible capillaries carry information, words, fantasies across borders these days; and some of this language starts to bleed back into how the story is represented in Iran. By today, the story’s been picked up across the Farsi blogosphere. The HRANA article is, so far as I can see, the only source any of them have. But an inflection from the US articles starts creeping into the story: the headline changes. “Risk of imminent execution in Iran for four homosexuals [hamjensgara]” one Farsi account reads, and others echo it.

Worse, the repeat-offending Italians at EveryOne Group get back into the act. They advertise an “Urgent Appeal” to — what? — “save the lives of four gay men.”

EveryOne Group is asking the United Nations High Commissioner on Human Rights, the European Union Commissioner for Human Rights, the Organization for Islamic Cooperation, the Islamic Human Rights Commission and civil society to support our call for the defence of the lives of these four young homosexual men and all those who suffer persecution because of their natural orientation.

The accompanying petition already has 4000 signatures.  (The one mercy is that Ahmadinejad is not yet among the addressees, but one imagines they’ll add him soon.) “The blood of four innocent gay men will be an indelible stain upon the conscience of the world community if this atrocity is allowed to proceed!” But don’t you see?  Marking them “gay” means they are not “innocent,” not in the Iranian judiciary’s eyes. You know nothing about these four men, nothing at all. But you’re still content to call them names that convict them. What gave you that right?

Everyone Group on Mouloudzadeh, 2007: Makwan lives on, so why feel guilty?

And of course Peter Tatchell, who’s always happy to exploit the living or the dead, rejoins the parade. He fires off a press release — “Four Iranian men to hang for sodomy” — not designed to help them, but to advertise a panel for the International Day against Homophobia that he’s cosponsoring.

I don’t know anything about these four men; none of us are likely to, until we hear from HRANA. I think I can predict, though, what will happen. The EveryOne Group’s campaign will go forward, the petition will accumulate its fungal signatures, all with the greatest good will; demonstrations and banners may cap off the news articles. And the men will die. Whether all these voices chanting that they’re “gay” will contribute to their deaths depends on how loud they grow, and whether the Iranian authorities are paying attention. But the ease with which we attach identities to people we’ve never seen and know nothing of — only because they’re there, not here, only because they are malleably foreign and employable to us, only because they’re in Iran and we need to affix a certain narrative to both violence and victims there — is overwhelmingly distressing. And so is the ease with which we neglect the threatened consequences. We’ve learned nothing from the miserable follies around Makwan. Blood cries out from the ground; we haven’t begun to listen.

12 thoughts on “Four “sodomy” sentences in Iran: On not learning from our mistakes”