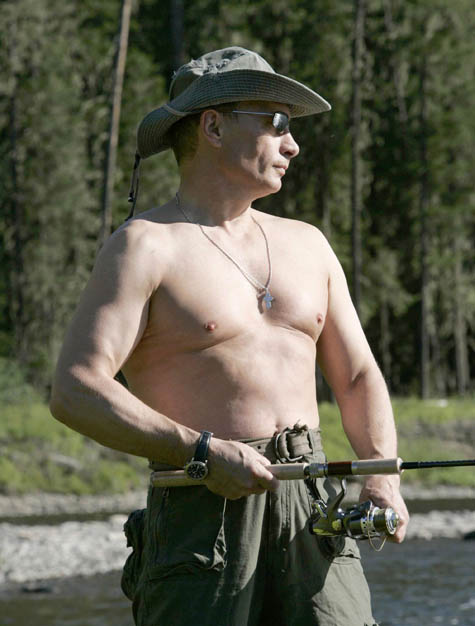 Brokeback Moscow: Everything is fine here in Marlboro country

Vladimir Putin dabbled in the promotion of homosexuality this morning. After all, he can get away with it. In an interview published by AP, he praised the notoriously decadent Tchaikovsky, and promised that everything for LGBT folks in Russia will be fine, fine.

I assure you that I work with these people, I sometimes award them with state prizes or decorations for their achievements in various fields. We have absolutely normal relations, and I don’t see anything out of the ordinary here. They say that Pyotr Ilyich Tchaikovsky was a homosexual. Truth be told we don’t love him because of that, but he was a great musician, and we all love his music. So what? There’s no need to make a mountain out of a molehill, there’s nothing horrible or scary going on in our country.

Great; unlike scary Syria, which understandably took up most of the conversation, Russia continues in the peace that passeth understanding. In response to a question that has all the marks of being planted (“You said earlier that President Obama was welcome to meet with members of gay and lesbian groups in Russia. Would you also be willing to have such a meeting?”) Putin voiced eagerness to listen not only to the musical gays, but to the ones who just talk.

If any of them would like to meet me then, by all means. But so far there hasn’t been any such initiative. We have many such groups, various organizations, societies, and as a rule I meet with anyone who voices a request for a meeting and offers to discuss an important problem. So far there haven’t been any such requests, but why not?

Convenient. It cocks a snook at Obama, and allows Putin to show that civil society (all those “groups, various organizations, societies” now hamstrung by draconian registration requirements under his laws) is functioning just fine despite everything.

In an interval so brief that subatomic particles would envy it, anti-Semitic activist hero Nikolai Alekseev announced he is asking for a meeting.

Quick, before the Jews find out:
“A formal letter requesting a meeting today will be sent by me to the Administration of the President of Russia.”
“Dear Vladimir Vladimirovich! I ask you for a meeting to discuss the situation of LGBT people in Russia and around the world!”

For a long time, some activists in the West — along with the US and UK gay press, and others — have proclaimed Alekseev the leader of Russia’s gay movement, despite ample evidence of his pathologies and prejudices. They didn’t give a damn, either, about the disinclination of Russia’s actual, vibrant gay movement to follow Alekseev’s erratic lead. “Not many people would have dared continue to put themselves in the frontline and take on the power of the ruthless tyrannical Russian state,” Peter Tatchell wrote in 2011 (this despite Alekseev’s insistence, over many years, that he was in no way an opponent of Putin). “Sadly,” Tatchell added, “too many people were ready to believe some of the malicious things said against him.”  Alekseev’s faithful scribe and oddly fawning promoter Doug Ireland called him, in Gay City News in 2010, “the internationally recognized symbol of the nascent new generation of liberated Russian queers.”

Now, for the first time, Russia’s government agrees with them.  The official news agency RIA Novosti referred to him today as “the leader of the Russian gay movement.” The Presidential press secretary told the agency that “Putin is always a supporter of dialogue. Certainly, it is important to determine the theme of the meeting …  If he wants to ask a burning question, of course, I am confident that the meeting will be considered as [a matter of urgency.]”

If this meeting happens — and if Putin is smart, he will do it, perhaps after putting some tranquilizers in the samovar — you can expect a communique from the duo saying that everything is fine across all of Russia, maybe even for the gays in Syria too, that those crazy human rights activists (whom Alekseev was deriding as “extremists” as far back as 2007) should be jailed, and that the law really doesn’t make any difference. Maybe Moscow Pride will finally be allowed, as a moneymaking venture, as long as it’s indoors. Maybe Alekseev will get one of those State prizes. Maybe he will even sing Evgeny Onegin for Putin, in a command performance.

I am not one of those who believe (as Oleg Kashin speculates today at Svobodnaya Pressa) that Alekseev has somehow been captured, bullied, or blackmailed by the Kremlin and is now under their control.  That easy explanation seems to me a product of the same naiveté about the man that his Western fan club helped promote. The government doesn’t need to pressure Alekseev for him to be erratic and divisive. They just need to wait. Anybody who’s watched him for years knows that jealousy and opportunism come to him as second, or first, nature.

What’s at work isn’t State intimidation; it’s much simpler. It’s Alekseev’s passion for publicity, something that he’s learned at the feet of stuntmen, pseudoactivists, and journalists in the West. He could certainly use some good publicity right now; here’s a way to get it. His pursuit of the paparazzi, and Putin’s need for a friendly headline, have just converged. Alekseev’s fan club plucked the man from obscurity, kept him in the limelight for years despite burgeoning doubts and questions, ignored and actively insulted other Russian activists doing serious and important work, and fed his hungry ego till it burst. They made him. He’s their golem — a Jewish legend Nikolai wouldn’t like, but in which he might feel the shock of recognition. But unlike the golem of the old stories, Alekseev can’t hurt his makers. Instead, it’s Russia’s LGBT community whose rights will suffer.

2 thoughts on “Promoting homosexuality versus promoting one homosexual: Putin, Nikolai Alekseev, and the publicity machine”