These photographs appeared earlier today on a JustPaste page set up by the Islamic State’s province of the Euphrates (Al-Furat). The link has spread non-stop on Da’ish-affiliated Twitter accounts ever since. The headline on the page, and the caption under each photo, is “The execution of the judgment of God on the acts of the people of Lot.” 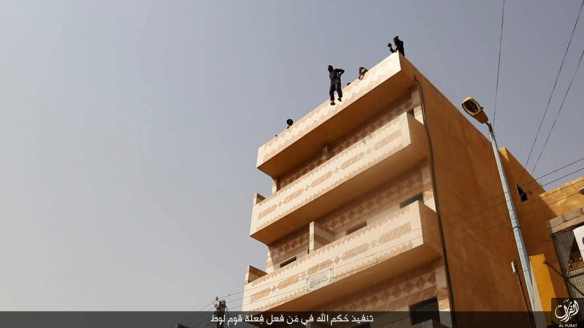 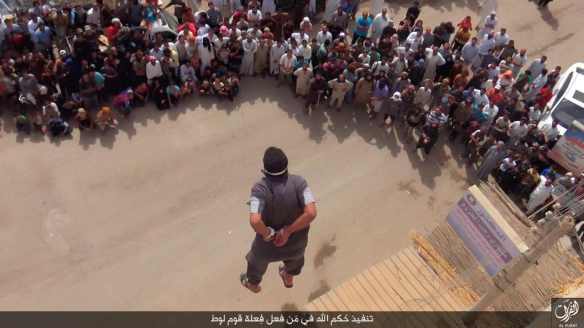 Da’ish announced the formation of the “state,” or province, of the Euphrates in August 2014. It takes up parts of eastern Syria and westernmost Iraq; its proclamation was meant to show the Islamic State’s contempt for the old national borders — cocking a snook at Sykes-Picot, as the head of the Syrian Observatory for Human Rights explained at the time (more or less).  The province centers on Al-Bukamal, better known as Abu Kamal, a dusty Syrian border town of some 60,000 along the Euphrates, as well the town of Al-Qa’im across the Iraqi line. My guess is that the execution took place in Abu Kamal.

Abu Kamal in relation to Syria and Iraq. L: Map of areas of control in Syria as of July 2015 (Institute for the Study of War, US); R: Map of the Syria-Iraq border at the Euphrates River (WikiNews)

Da’ish’s Euphrates state has long been a busy source of propaganda. Isdarat — the ISIS imitation YouTube channel — put up a glossy video today, produced by the Euphrates state, on “messages from Muslims in the lands of the unbelievers.” Another JustPaste page today posted pictures from a Euphrates-state training session about “Lessons on preaching” (or “missionary work,” or “advocacy”), apparently for confronting the great unbelieving Abroad. No specifics about the agenda, but there’s an implicit parallel between enemies without and within. Some ISIS blogs show photos from the training session and the execution together, as though the participants went straight from the tutorial to the killing.

Probably they did. Reports of Da’ish executions for homosexual acts have accelerated, with a spurt in June and July (around the time of the US Supreme Court marriage ruling, a huge headline across the Arab world), then the unconfirmed murder of nine people in Mosul on August 22, two days before the UN Security Council’s notorious meeting on the topic. There are many things we don’t know: for instance, whether the killings themselves have intensified, or simply Da’ish’s publicity around them. In late July, Abu Bakr al-Baghdadi forbade Islamic State groups from releasing exceptionally gruesome execution videos, apparently realizing such imagery was sullying the movement’s image. Still images weren’t covered by the ban; but each photo released now implies a certain calculation, someone in Da’ish’s chaotic structure deciding its propaganda value trumps disadvantages. The publicity itself thus politicizes death. It suggests that executing the “people of Lot” is morphing from a religious duty for Da’ish into a political tool, another mode of defying its enemies. And my strong feeling is that the Security Council’s noisy, impotent rhetoric can only make things worse.

What exactly was the point again of putting LGBT victims of ISIS under the symbolic protection of the United States, and invoking the UN Security Council to save them?  It only makes sense if there is something the US and UN can, and will, do. The Security Council has done nothing, nor are they going to do anything. America’s protean strategies on ISIS get rephrased, repackaged, and re-spun daily, but the lavish expense of words and money has no effect on anything that happens on the ground. Three reports this week indicate the depth of American uselessness. Intelligence analysts claim that senior military officials deliberately distorted their findings, to persuade Obama and those around him that the war on ISIS is going far better than it is. US airstrikes, the strategy of choice, continue to kill civilians in ISIS-controlled areas, alienating publics already primed, in many cases, to loathe and fear American action. And a $500 million Defense Department program to train 5,400 Syrians to take up arms against ISIS has only “four or five” fighters left in the field. The Obama administration talks about rescuing the gays, but it’s all publicity for a domestic audience. Those who suffer because of this self-indulgent charade are voiceless, voteless, and a long way away.

ISIS is a low-hanging wasps’ nest. Poking it with a stick is dangerous unless you have a clear plan for dealing with the consequences. This is no less true when the ones with the stick won’t be the ones stung.

Da’ish soldiers at a checkpoint in Abu Kamal, from a propaganda page of the Euphrates state at http://justpaste.it/hauajes4

Leave a Reply to A Nonni Mouse Cancel reply