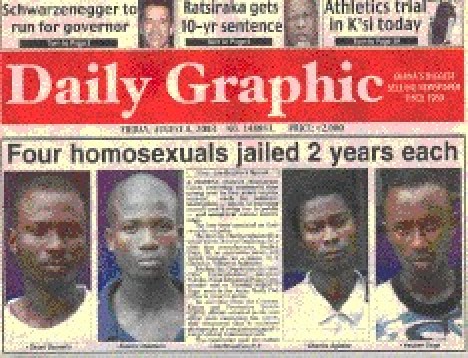 a Ghana headline from 2003: but we need more laws!

Ghana, in recent months, has been the scene of a mounting moral panic about the “threat” of homosexuality. The press warns about  “increasing growth In numbers” of homosexuals:

Some people make the claim that homosexuality (sexual relations between people of the same sex) became known in Ghana when tourists, international workers and even missionaries flooded the country in the 70s. Those within the group who were homosexuals invited innocent boys to their houses, flushed them with gifts and money and promised to send them to the rich countries. … Many Ghanaians went abroad and returned as homosexuals. Many also went to prison and indulged in gay habits which became habitual, and followed them even after their release from prison.

Girls also pick it from boarding secondary schools. Senior girls have their “supi” and only God knows what they do with them. There are now gay prostitutes in Ghana.

The Christian Council of Ghana condemns the “detestable and abominable act” :

Declaring the position of the Council on homosexuality in Ghana, Reverend Dr Fred Deegbe, General Secretary of the Council, said the issue of homosexuality had become so serious that Ghana had witnessed gay marriages . … He said the Council had observed with dismay the claim of homosexuals that nowhere in scripture was homosexuality and the same-sex committed and loving relationships condemned and called for the need for Christians to frown such behaviours.

He explained that some Ghanaian youths have adopted and emulated certain lifestyles including homosexuality being practiced by the western world and there was the need to condemn this abomination from happening on Ghanaian soil. “We Ghanaians and for that matter Africans cherish our rich and strong values on issues such as homosexuality and we must not allow anyone or group of people to impose what is acceptable in their culture on us in the name of human rights”.

The baiting quickly moved into the political arena. When an opposition-party expert on health said the right to privacy protected private sexual acts, and asked “Why should what two people do in their privacy without confronting anybody, be subject to the law?” — a presidential spokesman accused his entire party of “supporting and promoting the activities of homosexuality in Ghana.”   And the Minister for Ghana’s Western Region promptly “tasked the Bureau of National Investigations and all security agencies to smoke out persons suspected to be engaging in same sex.”

He also enlisted the services of landlords and tenants to provide reliable information which will lead to the arrest of homosexuals.  His directive follows months of campaigns against the practice of homosexuality in the country.

Fortunately, that order appeared to be mostly hot air and bluster.

But the British government’s recent public claim that it will link overseas aid to human rights performance, especially singling out LGBT rights as an issue, has served to make the “threat” homosexuality poses explicit. Now the homophobes know what they’re fighting, and they are fighting mad. Yesterday Ghana’s President proclaimed he would forgo foreign aid if necessary: “I will never initiate or support any attempt to legalise homosexuality in Ghana.”

Today comes news that the country’s parliament may consider new legislation to keep homosexuality from “flourishing.”

In Ghana, legislators are set to begin discussions on strengthening legal sanctions against practicing homosexuals.

President Atta-Mills was quoted as saying “no one can deny Prime Minister Cameron his right to make policies, take initiatives or make statements that reflect his societal norms and ideals.  But he does not have the right to direct other sovereign nations as to what they should do especially where their societal norms and ideals are different from those which exist in the Prime Minister’s society.”

Catherine Afeku, an opposition MP, offered a somewhat ambiguous note of caution. She has previously “called for a comprehensive policy from government on the way forward when it comes to the issue of homosexuality.” She echoed previous reminders of protections for private life:

Member of Parliament Catherine Afeku says there seems to be overwhelming support from legislators backing a review of the penal code to address homosexuality. “Ninety-nine percent of the members in the chamber support the statement that as a people, our cultural norms, our societal upbringing, does not accept homosexuality,” said Afeku. “But, once we have brought out the emotional condemnation, we have to put our thinking caps on and look at the law… What people do in their rooms cannot be legislated upon because we don’t have anything on the books right now that will punish that act.”

It’s not clear, then, what any new legislation might do, since Ghana still retains its colonial-era sodomy law punishing “unnatural carnal knowledge.” It could follow the lines of Nigeria‘s or Uganda‘s long-bruited bills: prohibiting organizing around sexuality, advocating for human rights, or any form of public visibility.  Or it might strengthen the existing law’s intrusion into private life.

Or the rhetoric might die down in due time, as the advantages of political posturing recede. What’s certain is that Cameron’s own posturing continues to feed a backlash across Africa. It’s hard not to think: God save us from our friends. And in that spirit, a coalition of sexual rights and human rights groups in Ghana issued a statement today:

Accra, 03 November, 2011: The Coalition against Homophobia in Ghana (CAHG), the Gay and Lesbian Association of Ghana (GALAG) and other LGBT Networks in Ghana are surprised and in total shock at the increased interest by the UK government to withdraw aid to some African countries who are homophobic. Though the Coalition have no problem with calling on government to abide by the British code of conduct for financial support, we believe LGBT people do not live in isolation in Africa.  We have families and friends who need these aids to survive on daily basis.

Cutting aid to some selected Africa countries due to homophobic laws therefore will not help the LGBT people in these countries, but will rather stigmatize these groups and individuals. LGBT people will be used as scape goats for government inability to support its citizens and some sectors of the economy.

The challenge now is that,

1.     Homosexuality is now being seen as western import due to the continuous threats from the UK government. It is now difficult to convince the ordinary person on the street that homosexuality was not imported into Africa; although we know and have always had African indigenous people who are born homosexuals.

2.     LGBT groups and organizations are finding it very   difficult and risky to organize their programs due to such threats and continuous discussion on radio and television stations in Ghana.

3.     Support from government agencies for LGBT programs with regards to health will be affected since the government will not want to be seen as promoting or supporting LGBT activities in the country.

We believe the UK government can use diplomacy to get some of these important issues across to the countries noted for promoting hate against homosexuals or the LGBT community in Africa. We encourage the UK government to find other alternative way to address the issue other than this option, which is going to increase   the level of stigma, violence and discrimination against LGBT people in Africa.

Though all these noise continue to go against LGBT groups and individuals in Africa, development partners never supports LGBT initiatives on the ground. Embassies and consulates including the EU offices continue to turn deaf ears to LGBT issues insisting that their priorities do not include LGBT people in Africa.

We are by this release appealing to development partners to channel some support to LGBT groups and organization in countries like Ghana to support local or internal advocacy as well as network building with state institutions.

This we believe will go a long way to help the LGBT people in Ghana and Africa at large.

For more information, please contact the coalition on coalition.homophobia.gh@gmail.com

1.     Coalition against Homophobia in Ghana

7.     Young People Advocate for a Change