John Aravosis published an article about Nikolai Alekseev’s latest Moscow protest on his blog today. It’s interesting how he excuses doing this. He objects to other media covering Alekseev (“I’ve noticed some top gay ‘news’ sites continuing to go to the anti-Semite Alexeyev for comment”) but not to himself covering Alekseev. He squares the circle by pretending that Alekseev wasn’t behind the demonstration (“it’s unfortunate that the protesters included in their group known anti-Semite, Nikolai Alexeyev“) when of course Alekseev didn’t simply happen along for the ride, he organized the whole thing. It’s all a bit like: I didn’t want to show you Britney Spears’ privates on my blog, people, it’s just that they walked right onto my computer screen.

The truth is, it’s much more sexy and clickworthy, from an American perspective, to run photos of Alekseev holding an catchy English-language sign (no Google Translate needed!) and getting chased by police, than photos of other Russians holding up Russian slogans about substantive things like the fate of Russia that only Russians care about. It would be nice if Aravosis would admit this — and admit there’s a symbiotic relation between the Alekseev lust for controversy and the Aravosis lust for blog hits. It would spare us all the denials.

When it comes down to it, no one would fraternize with a “human rights activist” who calls blacks the n-word, calls Latinos “wetbacks,” or calls gays “fags.”  There’s no excuse for the tolerance some in our community, and some on the left generally, show when the victims of bigotry are Jewish.

One reason this is remarkable is that a couple of hours later, Aravosis was Tweeting:

Now, what Aravosis said on his blog about Marco Rubio, the Senator from Florida, was this:

I was at my parents’ house last summer, watching the Republican convention … when I looked up at the TV to see who was speaking, saw some cherubic-faced yet-ageing man, and said to myself, “who’s that queen?” It was clear to me that whoever was at the dais must be gay …

Rubio and wife: Lose the beard, my alarm bells are ringing

That’s all the evidence. My own gaydar is sufficiently bad that I wouldn’t call somebody a “big fag,” in public, on its sole basis. Probably Aravosis’s gaydar is a precision instrument by contrast, capable of picking up distant quasars of queeniness, like the Hubble Telescope. I bet he was born with a super-keen eye for queens, that is, for men who aren’t quite manly. We’ve already seen this with Johnny Weir, whom he pegged instantaneously as one of those unreliable pseudo-guys bending like a fey reed in the wind. You might well ask, though: can this go too far? Should a human rights activist define his relationship to trans* people’s rights by asking what on earth he has “in common with a man who wants to cut off his penis, surgically construct a vagina, and become a woman”? Should a human rights activist call an effeminate man a “freak of nature“? Well, obviously it’s OK, because nobody says “sorry,” and we keep fraternizing.

But wait a minute. Another question.

What would you say about a guy who uses that line about  “a woman is equal to a camel” over, and over, and over, as if part of the fun is that he gets to insult women and Arabs at the same time?

Under the limelight: Lucas in his element

This fellow, who has a long record of defaming whole groups based on their race or religion or immigrant status or nationhood, is porn intellectual Michael Lucas, of course. And I haven’t heard a word of objection from John Aravosis about him — about the fact that he sets himself up as a leader in the anti-Russia campaigning, and gets to use the Advocate and Newsweek as platforms for his bile, and writes about “freedom” and “equality” as if he knows what the words means,  and marches off to Queer Nation meetings to tell activists what to do. Any complaints that “the protesters included in their group known racist Michael Lucas”? None. Not from Aravosis, or Melanie Nathan, or most of the other people who feel or feign horror at Alekseev’s diatribes. Nathan even recommended Lucas’s opinions (“Michael Lucas wrote a very good article encapsulating the downfall of Nikolai Alekseev”), and Aravosis linked to him, without any hint that there might be a bit of irony about one open racist condemning another.

It’s all so inconsistent. I’m not entirely sure what Aravosis means by “the tolerance some in our community, and some on the left generally, show when the victims of bigotry are Jewish.” (Is there anybody relevant, except Peter Tatchell, who’s failed to voice loud anger over Alekseev’s attacks?)  I do know, though, about the tolerance some show when the purveyors of bigotry are rich, and famous, and have influential friends, and draw the hungry attention of the cameras: and when the victims they vilify are powerless, marginal, despised. Alekseev, in his minor way, lived off that syndrome for a long time. I’m waiting for John Aravosis to notice the fact that Michael Lucas keeps doing it. 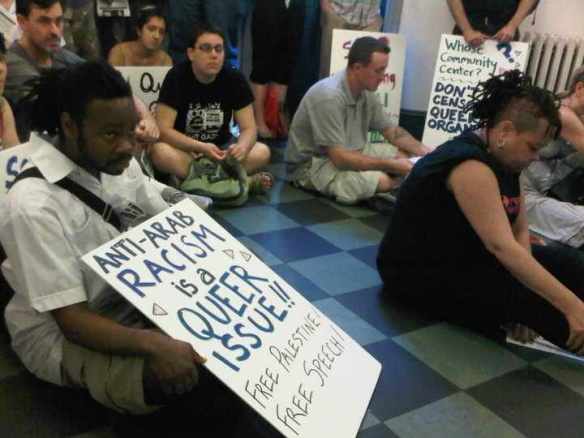 Members of NYC Queers Against Israeli Apartheid stage a sit-in at the New York LGBT Center to protest a Michael Lucas-inspired ban on Palestine-related events, June 8, 2011