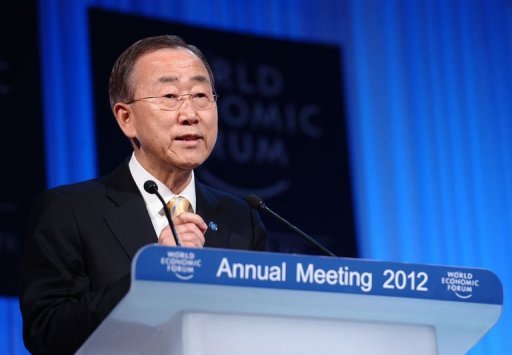 Shoot for the Ki-Moon

“One form of discrimination ignored or even sanctioned by many states for too long has been discrimination based on sexual orientation or gender identity,” Ban said.

“It prompted governments to treat people as second class citizens or even criminals,” he added. …

“Confronting these discriminations is a challenge, but we must not give up on the ideas of the universal declaration” of human rights, Ban told the summit.

Ban has shown more nerve over the years than I’d have thought possible at the beginning. Good for him.

All this took place amid the inauguration of the African Union’s posh new headquarters in Addis Ababa — and that blingy building suggests why neither Ban’s admonitions, nor David Cameron’s threats, nor all the pious efforts of those who want to squeeze humanitarian aid in the name of human rights, may in the end amount to much.   The elaborate complex, a glossy imitation of the UN building towering over one of Africa’s poorest cities, cost between $120 million and $200 million (US), and was entirely constructed by China. China Daily quotes  “Zeng Huacheng, a special councilor to the AU headquarters project from China’s Ministry of Commerce”:

“The accessible height of the main office building is 99.9 meters, in reference to the founding date of the AU and the rise of the continent,” Zeng said. “The panoramic view of the conference center is like two hands holding each other, signifying the strengthening friendship between China and Africa.”

In the thin air of Ethiopia’s low-slung, mostly ramshackle capital, a glittering tower complex is erupting from a warren of corrugated tin roof shacks that many locals call home. …

Though the CSCEC [China State Construction Engineering Corporation] describes its efforts there as “aiding” the African Union, make no mistake, it is building the facility wholesale. Stern-faced Chinese foreman command ever-smiling Ethiopian laborers who are working round the clock to finish the project at breakneck speed for its planned January 2012 inauguration. …

In anticipation of a hoped-for visit to Addis Ababa by President Hu Jintao for the new AU’s debut, [a Gabonese Diplomat]  stated: “We cannot thank China and it’s leaders enough for it …”

As China scours the continent for resources virtually unchallenged, this “gift” to the people of Africa will certainly come with strings attached. In a recent meeting with a high-ranking CSCEC official, Erastus Mwencha, a seasoned Kenyan diplomat who holds the deputy chair of the African Union Commission that oversees the project, hailed it in a recent press statement as a “permanent signature on African soil”.

When Asia Times Online visited the present AU headquarters hugging hilly Roosevelt Street, a representative of its Conflict Management Division lamented the depth of Chinese involvement both in Ethiopia and across the entire region. Africa’s sudden anti-democratic partner is engaged in a slew of road rehabilitation and construction endeavors in many parts of the country. 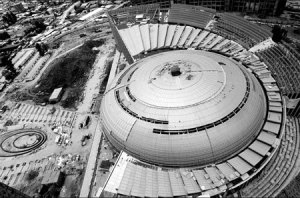 We are unbuilding socialism: The complex under construction

As I’ve pointed out here, Chinese aid for Africa — of which the new HQ is merely the biggest symbol — comes with few political conditions, certainly not rights-related ones. What accompanies it are economic expectations: that the continent will provide endless, cheap raw materials for China’s boom, as well as new markets for Chinese exports. That’s no good news for ordinary Africans, who’ll find their economies shunted every more firmly into a neocolonial niche of underdevelopment. But the elites who control the African Union’s governments will turn a profit.

As if in an emblem of this relationship, there weren’t even many African raw materials inserted into the building: Save them for export to Beijing!  “Even the furnishings were imported from China and paid for by the Chinese government,” a Ugandan blogger says sourly.   China Daily puts the best face on this:

To ensure construction quality, only the best materials were used and furniture was specifically designed and ordered.

“Details such as the height of a table and the color of a carpet were all discussed with representatives from the AU,” Zeng said.

The lack of political conditions doesn’t mean, though, that Africa’s integration into the Chinese co-unprosperity sphere comes without political consequences. That Ugandan blogger’s comments suggest how neocolonial dependency fosters both patriarchal power structures and cultural protectionism:

Where is the pride in us as Africans having this luxurious new home? Where I come from, and I believe many African men come from similar backgrounds, you are not considered a real man unless you have built your own house which you will call your home. Its only then that you can marry your wife and its only then that you are respected by everyone in the village. …

So congratulations to Ban Ki-Moon for speaking out. A glance at the balance sheets, however, shows there’s a long way to go.