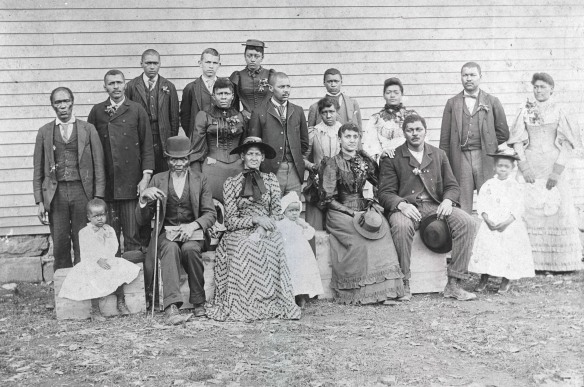 Addison and Cynthia, former slaves of William Rankin, and their descendants, Tennessee ca. 1890

Here, from the splendid blog Letters of Note, is a gem that reveals as much about the moral resistance to American slavery as anything I’ve ever read. And for irony, it’s as good as Johnson’s riposte to Chesterfield. (Thanks to my Kenyan colleague Kenne Mwikya for pointing it out.)

Read the whole thing. But here’s the situation, and a few sentences from the beginning and the end. In the autumn of 1865, a Colonel Anderson of Tennessee, formerly of the Confederacy, wrote to his former slave, Jourdan Anderson, asking  that he come back to work on his farm. Jourdan, freed by the U.S. conquest of the state, had moved to Ohio and found a job. He dictated his answer. In part:

To My Old Master, Colonel P.H. Anderson, Big Spring, Tennessee
Sir: I got your letter, and was glad to find that you had not forgotten Jourdon, and that you wanted me to come back and live with you again, promising to do better for me than anybody else can. I have often felt uneasy about you. I thought the Yankees would have hung you long before this, for harboring Rebs they found at your house. I suppose they never heard about your going to Colonel Martin’s to kill the Union soldier that was left by his company in their stable. Although you shot at me twice before I left you, I did not want to hear of your being hurt, and am glad you are still living. … I would have gone back to see you all when I was working in the Nashville Hospital, but one of the neighbors told me that Henry intended to shoot me if he ever got a chance. ….

In answering this letter, please state if there would be any safety for my Milly and Jane, who are now grown up, and both good-looking girls. You know how it was with poor Matilda and Catherine. I would rather stay here and starve—and die, if it come to that—than have my girls brought to shame by the violence and wickedness of their young masters. You will also please state if there has been any schools opened for the colored children in your neighborhood. The great desire of my life now is to give my children an education, and have them form virtuous habits.

Say howdy to George Carter, and thank him for taking the pistol from you when you were shooting at me.
From your old servant,
Jourdon Anderson.

For those interested in the issue of reparations, he also asked for back pay:

At twenty-five dollars a month for me, and two dollars a week for Mandy, our earnings would amount to eleven thousand six hundred and eighty dollars. Add to this the interest for the time our wages have been kept back, and deduct what you paid for our clothing, and three doctor’s visits to me, and pulling a tooth for Mandy, and the balance will show what we are in justice entitled to. Please send the money by Adams’s Express, in care of V. Winters, Esq., Dayton, Ohio.