MERIP (the MIddle East Research and Information Project) has a characteristically excellent article on last week’s horrific army violence against demonstrators in Egypt. The army’s line since the attacks has grown more, not less, muddled. Initially, for instance, they claimed that soldiers had been among those killed, martyrs to a rampaging Christianity. but they’ve been unable to produce corroboration. “Many analysts therefore doubt that the army suffered any losses at all. At [their] press conference, the generals displayed fuzzy footage of a military policeman being stabbed.”

The official reaction, the author concludes, “has been consistent with state responses to attacks on non-Muslim citizens in the Mubarak era. It can be summed up in three D-words: denial, demonization of protesters and (specious) distribution of blame equally among all the parties involved.”

But some parts of the state response add an extra frisson of horror:

Before the denials, however, there were two immediate actions by the authorities as events unfolded that fateful Sunday night. The first was that the army stormed the offices of the two television stations whose personnel had managed to tape soldiers firing on the protesters, the Egyptian January 25 channel, set up by revolutionary activists, and the US-sponsored Arabic-language satellite network al-Hurra. The goal was to intimidate the stations into going off the air. …

The second action was to announce on state-run television that “Copts” had put the army itself in peril. Subtitles at the bottom of the screen read: “Urgent: The Army Is Under Attack by Copts.” The presenter called upon all “honorable citizens” to go to Maspero to help defend the soldiers. Around this time, a report was also circulated that that two officers had been martyred at Coptic hands. Viewers at home were not unmoved. Indeed, that evening, many residents of Bulaq and other nearby working-class districts armed themselves with clubs and other weapons, before heading off to Maspero to assist the army in beating up and even killing protesters. One corpse had its head split in two, clearly by a sword or another sharp instrument, not an army-issue weapon.

The NY Times today states the extremely obvious: the military junta ruling Egypt shows less and less inclination to surrender power soon.   It’s unlikely they harbor any dreams of installing a lasting, openly military dictatorship. But they want a permanent veto over civilian politics, and they want a guarantee that no future government will mess with their fantastically lucrative networks of businesses and property. (Nobody knows how much of Egypt the army owns, but $2 billion a year in “military aid” from the US, over thirty years, adds up.) They are not particularly content with the array of potential successors on hand now. They can’t stand Mohamed El Baradei — too democratic; they are not terribly fond of Amr Moussa — too diplomatic. The various factions of the Muslim Brotherhood, opportunistically putting price tags on their grandmothers in a bid to be granted a bit of power, might be their best bet, but the generals find the idea of a religious government hard to stomach. So they are playing a dangerous waiting game: holding on to authority for as long as they can, in the hopes that occasional controlled bursts of mayhem and disorder will increase the population’s longing for a strong hand. 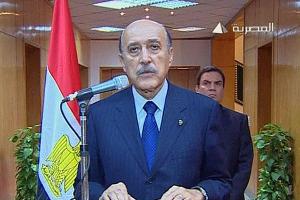 Omar Suleiman's disappearing act: pay no attention to that man behind me

In the meantime, they’ll try to figure out whose that hand might be. When I was in Cairo in June, a friend told me of rumors that the military had been keeping Omar Suleiman in suspended animation, hoping to resurrect his moribund career and present him as an acceptable presidential candidate. Suleiman was Mubarak’s longtime intelligence head and torturer-in-chief; in the last chaotic days of the ancien regime, the desperate president named Suleiman his successor. But he was sidelined by the military takeover, forced to announce Mubarak’s resignation and then disappear into retirement. Apparently the idea of selling Suleiman was quashed; somebody persuaded the junta that his reputation was too, well, tainted to make a plausible presidentiable. But the very possibility that they considered it suggests how incapable of democratic adaptation the generals are.