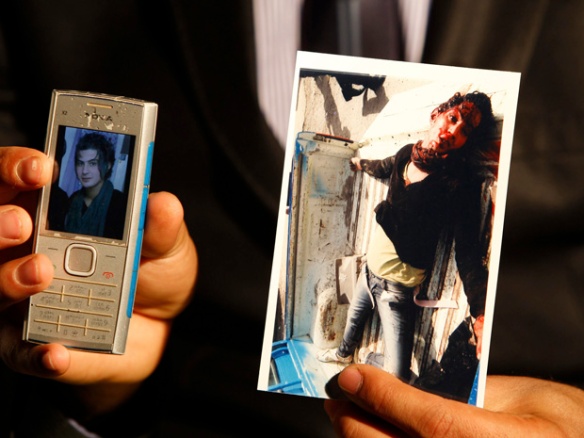 An Iraqi holds up pictures of his friend Saif Raad Asmar Abboudi, before and after his murder: Saad Shalash, Reuters

What do we know about the anti-emo campaign now?

For a start: Iraq’s Ministry of the Interior, you’ll recall, sent forth a statement on February 13 calling for “eliminating” the “phenomenon” of emo youth in Iraq. This offered an official imprimatur, and arguably incitement, to vigilante violence against “deviance.”  One result of the uproar against the killings, and against the Ministry’s weird words, came about this week. The incriminating statement vanished from the police website.

You could argue this is an attempt to quiet the fears their warnings roused. Or you could say, more plausibly, they’re trying to cover their tracks. I feel mildly prescient for having imagined they’d do this; I screensaved the original proclamation. You can find it here.

Even if you take into account the impromptu comments of  government spokesman Ali al-Dabbagh, last week –that “there is no prosecution for belonging to the emo phenomenon  in the country … The security agencies are obliged to protect freedoms” — it doesn’t particularly sound as if the state is backing away from its anti-emo rhetoric. The Ministry of Interior’s February 29 statement, accusing emos of “destructive effects on the structure of communities,” is still up there on the Web. And this week the Ministry of Education stepped up its actions. Those bureaucrats, as I’ve noted, were responsible for a still-secret memo I’ve seen dating all the way back in August 2011: it urged prompt action “in response to the Emo phenomenon insinuating itself into our society”:

Wear what I tell you to: Iraqi schoolkids, from Al-Shaafaq

Last week, according to Al-Shaafaq News, the Ministry of Education followed up with a circular urging schools to impose uniforms “of gray and yellow colors” for all students, because those hues  “please the eye” according to a Quranic verse (found in Sura al-Baqara, for the curious). This should protect kids from “exotic trends.”  Killing them also helps, as we now know.

The army also got into the act — with a message exploiting Iraq’s sectarian divide. Lieutenant General Hassan Baydhani, Chief of Staff of Baghdad Operations Command, told Al-Sumariya News that “unconfirmed intelligence information” suggested that the reports of murdered emos were not just lies but a Sunni plot. Claiming that “security forces have not recorded any cases of killings of these young people,” he accused the President of the Association of Muslim Scholars, Harith al-Dhari, “in coordination with al Qaeda,” of spreading these rumors. Their motive?  “To confuse the security situation in Baghdad prior to the Arab summit.” 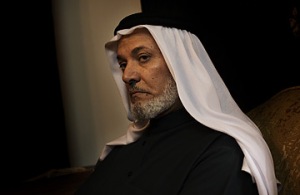 Let’s unpack this for a moment. Harith al-Dhari is one of Iraqi Sunnis’ most respected religious figures; his family has a long history of leading insurgencies against British imperialism. The post-Saddam Shi’ite governments have repeatedly accused him of collaborating with Al Qaeda in Mesopotamia (he’s denied it, claiming the group killed four dozen of his relatives).  At month’s end, Iraq is hosting an Arab League summit for the first time in two decades, a considerable source of national pride. Al-Dhari has urged the region’s leaders not to lend legitimacy to the increasingly repressive Shi’ite leadership now in power. The general’s slightly paranoid story suggests the government is exploiting the emo reports as a handy chisel to chip away at al-Dhari’s credibility before the summit starts.

Curiously, Dan Littauer and his unreliable website Gay Middle East have spread the exact mirror version of the same rumor, which they got from an (equally sectarian) anti-Shi’ite blogger outside Iraq. According to that side of the story, the killings are really happening, but it’s all the extreme Shi’ites fault: Moqtada al-Sadr, head of the Mahdi Army militia, “wants to embarrass Prime Minister Al-Maliki [by] exposing him and his party’s Bard organization, as unable to protect their own people in front of the Arab League.” (He means the Badr Organization, associated with both the government and Shi’ite religious leader Ayatollah Sistani.) So the Sadrists are murdering emos to make the government look bad in front of other Arab leaders.

Are you following all this? Lord, I hope not. It’s all speculative and slightly ridiculous. It’s highly unlikely the anti-emo campaign was meant to embarrass the government: if it were, the killers would have worked much harder to get publicity from the start. (Instead, it was pretty much quiet bloodshed until the end of February.) Any militia wanting to expose the fragile security situation could do so far more spectacularly and with greater economy of means than by slaughtering some obscure kids. For instance: they could embark on the monstrous bombings in 20 towns and cities across the countries yesterday, terror attacks that killed dozens. (Al Qaeda in Mesopotamia has apparently claimed responsibility.)   But the way these twin rumors, precise inverses of one another, appeal to credulous people inside and outside Iraq indicates both the matching fears that fester on either side of the Sunni-Shi’ite divide — and the tenuous state of truth in an uncertain country where hard facts are hard to attain.

2.  Voices of opposition to murder

In Najaf on March 12, Ayatollah Bashir Najafi (one of the highest Shi’ite leaders) joined Moqtada al-Sadr and Ayatollah Sistani in condemning the killings. In a fatwa issued by a spokesman, he said that the “proper position” toward the young is “advice and guidance, and religious institutions and the ministries of education and culture carry full responsibility in this regard…. The position toward emo is not to murder them, but to support our youth through reformation and direction.”  There is “no permission for this spilling of blood.”

The controversy over emos continued in Iraqi media all week — though driven from the headlines today, to be sure, by the bloodbath of bombings yesterday.  And the public, political indignation over the pattern of killings has been the only hopeful thing about the whole horror.

MP Khalid Shwani spoke in Parliament, claiming that 53 emos had been killed across the country, including 13 in Baghdad, and repeated demands for an investigation. A spokesperson for the Iraqi List — a party mainly representing secular Shi’ites — accused “unnamed actors of sponsoring campaigns to  to intimidate young people. She declared that “the children of Iraq are not demons or taking directions or instructions from Israel or other countries,” and demanded that “we respect and value the youth population”:

We should look at the big dreams they hold in their heads, the  aspirations and faith and courage in their hearts, and give care and support for their future.

Youth identifying as emo smoke a pipe in the southern city of Najaf: AP

In the press, one commentator drew on Wikipedia to answer the question “What is the difference between emo and Satanists?” — finding that there was one, at least.  Even in addressing less sensational concerns, though, a certain sociological disdain continued to media approaches to the issue. As in most moral panics — such as 1950s fears in the US about comic books, or 1960s paranoias about mods and rockers in the UK — a consensus persists among liberal thinkers in Iraq that the kids in question are a Problem, and even if violence is not the answer, some kind of professional intervention is. Some emos were given space to speak in the media: but their words were filtered through a heavy layer of Concern.  One emo girl “denied that the emo phenomenon was linked to worshipping Satan,” but “members of the group confirmed a tendency to commit suicide as a result of chronic depression, which eventually leads to psychological disorders and perhaps to an inclination to abuse drugs.”

There are three voices I want to echo, though. Writing with both sympathy and sophistication, Nazmi Kamal Fares, an academic and researcher, tried in Al Rafidayn to place the “emo stigma” in a larger context — that of the “chronic Iraqi fear of freedom.”

The emo crisis today alerts us again to the need for sustained determination to raise the issue of civil liberties in Iraq, specifically the question of the relationship of the majority to the minority …  Once again, there has been made clear the inability of the majority to structurally absorb the freedom of the minority, and the failure to establish a humanitarian perspective toward the difference of others.

And in the columns of Al-Seyassah in neighboring Kuwait, an Iraqi writer issued a j’accuse: “You are killing the nation, not emos.”

Finally, with all this going on around him, a seventeen-year old emo boy opened a page on Facebook.  The defiant darkness of what he wrote on it in English has its own kind of stylized courage:

►►►┼ BE CAREFULL YOU ENTER MY ZONE OF DEATH ┼◄◄◄