Still hazy after all these years

Missed connections; or, how not to find lesbians

Here’s some of what a friend of mine, an Egyptian lesbian, 33 and butch, told me about days and nights during the Revolution in Midan Tahrir, where she put her life on the line.

We felt the presence of women, very strongly — and the presence of queer people very, very strongly, on the front lines, at essential moments. How amazing it was when people were just dealing, without judging. On February 2, the Ikhwan [Muslim Brotherhood] were there, and in a couple of hours they organized an assembly line to break the stones, to carry them to the front lines, with water and food supplies — they organized a hospital. I was with the shock troops, in the front line.   … We needed to frighten the other side, so they would think that we were stronger than they’d thought. They had guns, Molotov cocktails. We were fighting them with sand and rocks.  I was up there wearing a hood, to protect me, and you couldn’t tell if I was male or female. There was this Salafi near me, and he kept eye contact. He came down to me, to give me water. He said, I’ll take you further up, to the real front, the most dangerous zone. Just keep me in your line of vision, we can support each other.

I stayed there for hours, with eye contact with this man, on the line—and in the end I was positive that he realized I was a female. And he helped me stay there. …

It was moving for me, later, when I got to know about other protests in the global North inspired by Egypt. I’m not into this kind of petty nationalism—I believe in human rights.   But I am tired of being told: you are a second class individual, because you’re from the global South. You’re third class, because you are female. You are fourth class, because you are lesbian.   Suddenly we are at the center of the world. And suddenly we know that we can do it.

After the Revolution, Human Rights Watch, like other rights groups, sent hordes of workers to Cairo to interview Important People and figure out what had happened. One was Minky Worden, a colleague of mine, who’s editor of HRW’s spanking new anthology, “The Unfinished Revolution: Voices from the Global Fight for Women’s Rights.” I doubt they found my friend, a grassroots activist, Important enough to spend time on; zero of her passion or vision animates the book.  The volume claims to be a comprehensive picture of “the recent history of legal and political battles to secure basic rights for women and girls”; it banners a rah-rah quote from Nobel laureate Leymah Gbowee: “Women are not free anywhere in the world until all women in the world are free.” Well: some women. In 332 pages, the book doesn’t contain even one substantive mention of lesbian or bisexual women, their struggles, or their human rights.* Talk about being fourth class.

It’s 2012, and this should not happen. It’s shocking on many grounds. You can’t describe the international women’s movement in the 20th and 21st centuries without describing lesbian and bisexual women. They’ve been there at every juncture — as Charlotte Bunch and Claudia Hinojosa, for instance, have shown in documenting just one part of this rich history, lesbians’ activism at the UN. (Even the Universal Declaration of Human Rights owes a lioness’ share in its creation to Eleanor Roosevelt, who was, by modern biographers’ estimation, bisexual.) These fighters, like my friend, have stayed on the front lines: they’ve helped keep feminist movements conscious of difference and honest about the raw realities of sexuality. If they’ve been a target for violent attacks on feminism — more reason for HRW to acknowledge their importance! — they’ve also been among its boldest thinkers as well as bravest defenders.

I won’t even obsess here over the volume’s complete silence about the massive rights violations against transgender women and men — or its indifference to trans activists’ amazing successes at encoding progressive conceptions of gender in national laws. Some things no longer surprise me. But as a former Watcher, I do wonder what HRW was thinking, or failing to think. There are only a few possible interpretations of its perspective:

It would be interesting to know which of these reflects HRW’s current official position. 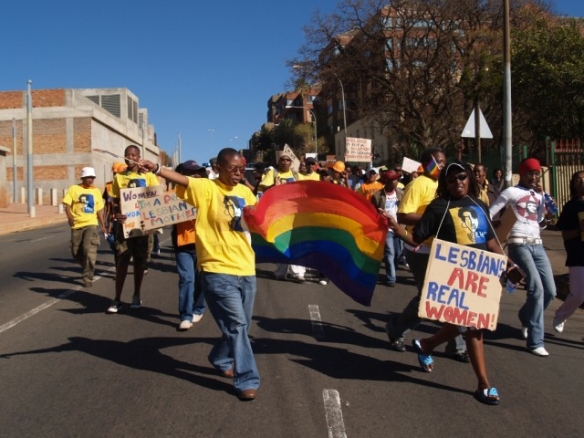 Lesbians are real women, and sometimes it bears repeating: Dyke March in Soweto, 2007, © Behind the Mask

Of course, I started the Lesbian, Gay, Bisexual, and Transgender Rights Program at Human Rights Watch, almost nine years ago. We did a slew of reporting on lesbian, and bisexual, and transgender women, and trans men. We hired the first-ever researcher at a a major human rights organization to work primarily on lesbian issues. One therefore feels particular disillusion that all this hasn’t filtered into the organization’s understanding of women’s rights. It’s tempting to mutter, with the grandpaternal gruffness of encroaching senility, that this omission wouldn’t happen if I were around. Non ego hoc ferrem calidus juventa consule Planco: feed that to your Babelfish. But that’s absurd. The silence speaks to deeper structural problems as pressing during my tenure as they are today. It illuminates at least three things:

Let’s start with the first.

I’ve pretty much spent twenty years trying to mainstream sexuality within the work of human rights. We rolled back many prejudices at Human RIghts Watch; but barriers in attitude persist. Three, hardly confined to the organization, remain relevant here:

Sexuality is not respectable. You may have a right to exercise it, but don’t expect me to bring it up in decent conversation. One sees this in the diehard reluctance of human rights researchers to raise the matter in their colloquies with “mainstream” partner organizations. I can easily imagine Minky thinking you can’t really promote the positions of lesbians (or, God forbid, pr-st-t-tes!) in a volume with a contribution by one Nobel winner (Shirin Ebadi) and a blurb by another (Gbowee). Never mind recent events in Liberia, which suggest Gbowee may not need a reminder that sexuality is always politically central. Sometimes they grasp these things better in Freetown than in New York.

Sexuality isn’t that important. Here what I’ve often called the “humanitarianization of human rights” kicks in: in an era of massive humanitarian catastrophes, cases seemingly on the scale of individuals shrivel in significance next to the gargantuan, aggregate anonymity of a Rwanda, a Darfur, a Sri Lanka. Without a queue of zeroes trailing the numbered victims, a situation can’t merit the diligence of crisis. Of course, if you tabulate the women and men jailed every day under (for example) anti-prostitution laws, many tortured or raped as a direct result, the zeroes start to accumulate, and the crisis becomes real. More below. But it’s still hard to persuade rights institutions of the simple, obvious fact that asserting one’s sexual autonomy is one of the major triggers for abuses worldwide.

Sexuality is private. It’s something you only do (legally) behind closed doors, and it can’t possibly be implicated in grand public events like revolutions. This is a delusion sustained by never talking to revolutionaries about why they were really there. Suffice it to remember Audre Lorde, who wrote that

During World War II, we bought sealed plastic packets of white, uncolored margarine, with a tiny, intense pellet of yellow coloring perched like a topaz just inside the clear skin of the bag. We would leave the margarine out for a while to soften, and then we would pinch the little pellet to break it inside the bag … Then taking it carefully between our fingers, we would knead it gently back and forth, over and over, until the color had spread throughout the whole pound bag of margarine, thoroughly coloring it.

This goes without saying

All three presumptions, however diminished at Human RIghts Watch, still haven’t gone away. Moreover, the organization’s structure reinforces them.  For the uninitiated, the group (typical of large rights institutions) is proudly centered on its regional divisions, dealing mainly with “mainstream” issues on the several continents. Then there are a range of thematic divisions — LGBT, women, health, business, and others. The latter are small, generally underfunded (during the seven years I was there, the LGBT program never got access to Human RIghts Watch’s general support money), and distinctly understaffed.  In order to do the work they need to do, they must depend on other divisions’ cooperation: not only to propose press releases or take on reporting on their own, but to assume the yeoman labor of talking to groups that represent thematic interests, not just “mainstream” ones, in their areas. 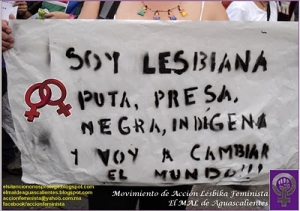 My staff worked extremely hard to sell sexuality issues to other divisions as, well, sexy. Yet overcoming the three attitudes above was a challenge. Ordinary practice and accumulated prejudices whispered to an ambitious researcher that an interest in LGBT issues would not, in the long run, embellish one’s career. What was needed and not forthcoming was a clear mandate from the group’s governance: a message that thematic issues were not poor stepkids, a child among the ashes doing work ancillary to the great stream of human rights, but were intrinsic to its current and core — and the organization’s “mainstream” sectors had to take them up.

Habit is a great deadener: so Beckett said. In 2009, someone in the organization’s program office analyzed which thematic division’s concerns were most or least taken up by other parts of the organization in their work. Not surprisingly, LGBT issues came out near the bottom. The program office (responsible for overseeing all the programmatic work) attended on me with a guilty hangdog-Hamlet look, saying This was an organizational failing and was there anything they could do? I had plenty of suggestions, starting with a general instruction from the leadership that each relevant division propose at least one project on LGBT rights. But the conversation faded at the crowing of the cock, as Shakespeare wrote in a famous play about a Denmark where nothing quite gets done.

This anthology is the result. Minky — the book’s editor, and, as I say, a colleague whose work I generally respect — writes how in April 2011 she spent her time in Egypt “interviewing human rights activists, women’s rights activists, and organizers of the Tahrir Square protests.” Now, I don’t know all the questions she asked, but I’m 99% sure some never occurred to her: “Do you know any lesbians? Were there any lesbian women in Tahrir? What were sexuality’s roles in the revolution?” The third would have gotten plenty of interesting responses. The other two, asked of most people, would have led ultimately to my friend, and to quite a few other women whose stories would have been compelling. But moral hesitation, or a monolithic category of “women” that foreclosed any subdivisions, or some other internal censorship kept the idea, I’m betting, from transiting her mind. And as a result, she never learned. The problem at Human Rights Watch is that the information to establish the urgency of the issues doesn’t arrive in sufficient quantities, because the questions don’t get asked across the organization. So the organization still doesn’t learn.

*The word “lesbian” occurs exactly twice in the book, both in an article by Gara Lamarche, HRW’s former Associate Director. One instance refers to his efforts in 1994 to expand “Human Rights Watch’s mandate to include lesbian and gay issues” — which the rest of the book might leave you supposing hadn’t succeeded. The other mentions Atlantic Philanthropies’ funding in South Africa “to address gender-based abuse and hate crimes against lesbians.”

CORRECTION: I’m reliably told the demonstration against Ugandan legislation shown above was in London, not New York.