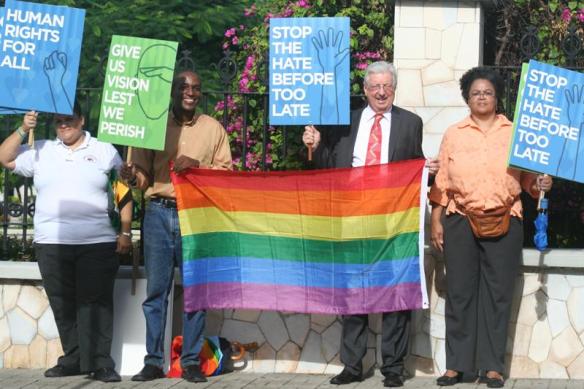 Watch this video, from Jamaican TV, of an interview with British – Jamaican human rights lawyer Lord Anthony Gifford. As a strong supporter of scrapping Jamaica’s sodomy law, he lays out the arguments against the UK’s noisy and confused promises to tie development aid to LGBT rights.

He’s right that open threats to Jamaica from abroad almost always create a “converse reaction.” But one thing I find troubling is his blanket claim that Jamaica, as a democracy, is in a different class from dictatorships, and can work this out for itself.  “To use this stick against a democracy like Jamaica –we are capable of having this debate within Jamaica … and I think it’s counterproductive.” How exactly does this differ from arguments that Israel supporters (including one of Human RIghts Watch’s founders) use to contend that human rights activists should leave the country alone?

Thirty years ago, Gifford was lead counsel for the plaintiff in the landmark case of Dudgeon v United Kingdom, where the European Court of Human Rights compelled Britain to eliminate Northern Ireland’s sodomy law. And the video below shows  Gifford and my activist friends Maurice Tomlinson and Yvonne McCalla Sobers discussing their new challenge to the Jamaican law before the Inter-American Commission on Human Rights: