A Romanian joke I learned long years past went:

Q: Mickey Mouse, Snow White, the intelligent policeman, and the stupid policeman are all eating Chinese food. Who eats the most?

A: The stupid policeman eats it all. The other three are mythical.

Intelligence isn’t something I associate with uniforms.

Still, we now know that New York cops, though gorged to immobility on Krispy Kremes and bribery, have run one of the biggest intelligence — as in spying — operations that’s stained American life since Vietnam.  We know this because of  the work four Associated Press reporters did to dig up the scandal.

And I say: hooray for journalism schools, hooray for training reporters to tell facts from lies and rumor, hooray for fact-checkers who do their jobs, hooray for the Associated Press for throwing itself behind this story, hooray for the money it makes to support the work, hooray for the staff it can hire down to the guys who run the Xerox machines and fill the staplers. This is the kind of thing we need a mainstream media for: big institutions that can make sure a story carries weight because it’s verifiable and verified, who can afford to shell out, however inadequately, for months of painstaking research. It’s the kind of story that bloggers, whatever their virtues, could never have unearthed or proven. Serious investigative reporting in the US is going the way of the dead-tree press, into archeological desuetude.  We’ll all end up lamenting it. The voicemail-hacking horrors that are dissolving Rupert Murdoch’s power seem in a weird parodic way like the death throes of real reporting, a snake’s tail flailing with its cerebral cortex cut away. After all, you have to have some information to amuse you.  But when one of Brangelina’s four legs can conquer a whole 24 hours in the blogosphere, the contents of Hugh Grant‘s inbox will seem more important than the contents of an intelligence agency’s files. The last real investigative reporters out there are also the last people struggling to restore a sense of proportion.

That’s one cheer for the mainstream media. Another is: more and more we need people who are smart, knowledgeable, and trained, to sort through the avalanche of facts and fiction falling on us daily, like Pandora’s box or Fibber McGee’s closet swollen to planetary scale.  Wikileaks is now releasing five million emails purloined from Stratfor, the sinister security-analysis firm which Julian Assange calls a ‘private intelligence Enron” (though it seems a bit more like Tom Clancy with a Lexis-Nexis account).   FIVE MILLION emails.  Seventy bloggers with seven hundred Macs could toil for half a year and not get a seventieth of the way through them. You need some folks who know what they’re doing, armed with the right search terms, to figure out where the scandals are. Wikileaks performs an in-many-ways inestimable service; but it’s not to be confused with journalism. The e-mail dump is just the raw material. The journalists are the ones who wade through the cesspool and parse the cc: lists.

(Oh, yes, my favorite revelation so far: Twenty years after the 1984 Bhopal gas leak that killed between 10,000 and 25,000 people, Dow Chemical hired Stratfor to spy on Indian activists demanding justice.)

My last cheer comes in part from reading this moving article, a reflection on the dangers journalists face in contemporary combat reporting.   The “embedded” journalist, such a repellent fixture of America’s two Gulf wars, seems to be a thing of the past, however recent. “Correspondents no longer get hilltop seats alongside generals as the lines of battle form, break and re-form in the valleys below them.” The killing of Marie Colvin and the death of Anthony Shadid, each heroic in a different way, are harbingers of new exposure. It’s not just revulsion at the compromised and corrupted integrity that embedding left behind. Part of it is the sped-up news cycle, the demand for instant information, which compels reporters onto front lines and even out of foxholes to capture image or experience. (The article features three photographs that war photographer Joao Silva took in 2010 in Afghanistan, just after his legs had been blown off by a land mine.) 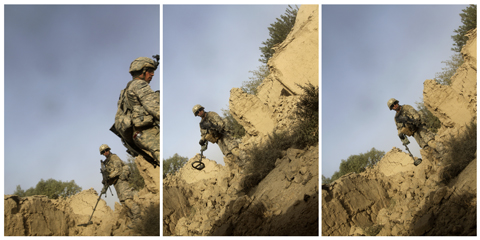 And part of it is that in the last spate of conflicts, there’s nobody to embed with even if you wanted to. The Syrian Army or Qaddafi’s forces won’t have you. The rebels provide only scant protection. In civil war — and, as I wrote below, all our wars now are becoming civil wars — there’s no civility. Nobody is safe.

So brave people die to bring us information, to force it on us in our wired and bit-infested security. If it’s only half a cheer I offer here, it’s not because I slight their courage or importance: it’s because there are other people outside the Mainstream Media and the mainstreams of the prevailing politics, who don’t have the wealth or power of the AP or the Times behind them, who suffer and die to shed a little bit of light as well.   As the article acknowledges:

[A]ll these countries remain infinitely more dangerous for the reporters, photojournalists, citizen journalists, translators and fixers of those countries who, unlike foreign correspondents, cannot jump into a taxi or aircraft when it gets too hot and do not have the protection of a foreign passport or an embassy when at the mercy of their own governments.

Bloggers in Syria, operating outside the inculcated and inherited restraints felt by traditional Syrian reporters in the state press, are in many ways the key people finding the facts about what’s going on in the mayhem of the revolution. As with the Twitterers during Egypt’s unfinished revolution or Iran’s aborted one, their on-the-ground views have their limitations. In the thick of things, the mayhem can overtake you.  The feel of the moment is not the same as knowledge.  There is something to be said for the synoptic perspective that alienness can bring. (The great historian Richard Cobb wrote beautifully about the odd and elusive things that can only be learned by a foreigner in a strange country, or by an investigator confronting a tradition not her own.)

The two can complement each other. All respect to those who choose not to run away. But my biggest and final cheer is reserved for those who, because they are rooted in the place they find themselves and part of its history, simply can’t.