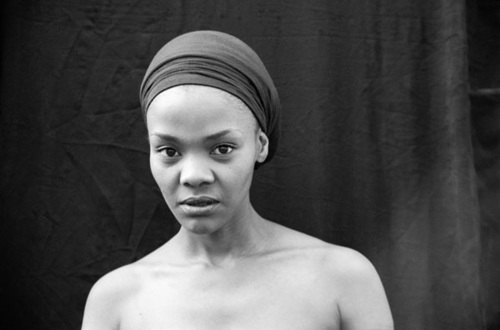 Despite all the pleasant words in South Africa’s progressive Constitution, black lesbians and trans men — people whose looks or demeanor push at accepted gender norms, or simply don’t fit in — face endemic violence, including the threat of rape to punish or to “fix” them. Among over thirty documented murders of lesbians since 1998, only two cases have seen convictions.

Amid this crisis, artist and activist Zanele Muholi has spent five years photographing black lesbians in an effort to affirm their identities. The resulting series is called Faces and Phases and Beulahs (queer South African slang  for “beauties”). Claire Breukel writes that “her portraits

are straight-shot black and white images that make direct reference to the tradition of portraiture. … Muholi’s role is to simply and effectively afford her subjects a platform to be “seen” and furthermore be recognized in a climate that has, to date, marginalized this community and omitted documenting its existence.

A documentary film, Difficult Love, directed by Muholi and Peter Goldsmid, has also grown out of the project.

These marvellous photographs inevitably bring to mind the Images of the Week in South Africa at the moment. The youth wing of the opposition Democratic Alliance party has distributed a poster on campuses showing an unclad white man and black woman in an embrace: 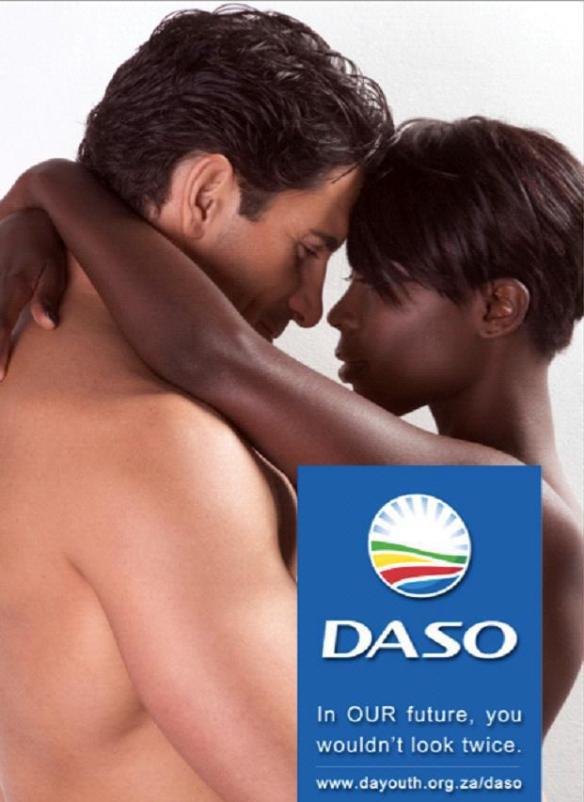 The poster roused a storm of controversy in the country.  South Africa’s Christian Democratic party accused it of “clearly promoting sexual immorality.” A leader of the Congress of South African Trade Unions (COSATU) claimed,

Comments on the DA Youth Facebook page ranged from the racist (a photo of an all-white  family with the caption “Now that’s how it should be!”), to the prudish, to the patriarchal:

“Who is the head of a house? Yes, a man, and the man makes the choices and the women listens … So to some it has been offensive that the man is white and the woman is black, because it places the black nation under the head of the house, so to speak.”

Imitations have also multiplied, including a gay one, which the Democratic Alliance Youth reportedly endorsed:

South African constitutional law scholar Pierre de Vos has a fascinating analysis of the controversy here. He argues that

the thought never seems to have occurred [to critics] that the women in the poster could be in charge … and that we cannot tell from the poster whether this is so or not. They have jumped to conclusions (based on their own internalised prejudices and stereotypical assumptions about race and gender and sex) that the woman in the poster is a meek receptor of male aggression.

The poster, he contends, serves as a reminder that

race hovers not far from the surface in private or other everyday settings … In South Africa we cannot escape race. We cannot escape our own race. Even when we claim that we have escaped the perceived shackles of race, we are merely confirming its presence by our stated yearning for its absence.

Absolutely true. At the same time, it strikes me that the posters, instead of challenging the viewer directly to examine her or his stance and presumptions (as Muholi’s photographs do), play on these “internalised prejudices” in very calculated ways. In fact, the poster needs the prejudices, in order to work at all.  The whole point of its saying “you wouldn’t look twice” in the DA’s ideal world, is that you do look twice now; the DA relies on your shock to grab your attention.

And part of the attention-catching is that the pictures confirm to certain old South African expectations. (The black woman, after all, is situated “under” the white man, by position and stature.) Catching people by their coat-sleeve of intolerance may be one way to promote tolerance, but it can backfire, too.

Moreover, and most interestingly, the poster shows the straight couple, in coy and conventional style, ignoring the camera’s challenging intrusion and the questions it raises, lost in their apolitical world of love. The figures don’t engage with the issues; they present themselves as innocents who just are. (In the gay version, it’s only the white partner who stares back at the viewer, acknowledging his or her interest. The black partner is raptly absorbed in the white man.)  This is quite different from the faces Muholi shows: those confront the camera and the watching world beyond it with their bodies if not their gaze, realizing they have become objects in the act of being seen, and that this challenges them to control how they are seen, to change the terms.

The centrist, neoliberalish DA’s main if not sole appeal is to white and mixed-race voters. It’s long chafed under the ruling ANC’s accusation that it is a “racist political party only committed to protecting the last vestiges and policies of apartheid.”  Or not chafed: its previous leader, Tony Leon, seemed happy enough to embrace the charge, indulging in racially-tinged rhetoric. (The party’s 1999 election slogan, “Fight Back,” was practically a clarion for backlash; the ANC redubbed it “Fight Black”.). The DA itself estimates it wins only 5% support among black voters in the country, who make up 80% of the electorate.  It’s been trying frantically to recast its image, most notably by picking a 31 year-old black activist, Lindiwe Mazibuko, as its parliamentary leader. (The party’s overall leader, Cape Town Mayor Helen Zille — a former journalist and activist who exposed the state murder of Steven Biko — is white.)

The posters are part of the party’s rebranding campaign.   You can’t help feeling, though, that they’re a distinct strategy of avoidance: deflect the question of race into a controversy over sex. They turn politics into erotics.

Bulworth: Out of the mouths of babes

Muholi’s photographs take sex (or the body, or gender) and frame it inescapably in political terms.   The DA posters, by contrast, take politics and try to make it sexy.  In the process they struggle to blunt its hard edges, and come up with romantic — literally — solutions to problems that remain stubbornly ones of power and of economics. They remind me, in their way, of Warren Beatty’s 1998 film Bulworth, in which a liberal senator, suddenly awakened to the crisis of race in America, turns rapper and decides that sex, if not love is the answer: all we need is to interbreed.

“All we need is a voluntary, free-spirited, open-ended program of procreative racial deconstruction. Everybody just gotta keep fuckin’ everybody ’til they’re all the same color.”

Sex is part of the problem — whenever it’s a way that hierarchies of power are defined or maintained; when it’s a basis for violence or hate; when, as in corrective or punitive rape, it’s used to brutalize and to establish who doesn’t belong.   But sex is not, in itself, the answer. Sex is always potentially political.  But sex isn’t the sum of politics. To imagine that injustice can be screwed out of existence is a pathway to leaving it in place.

Zanele Muholi’s photography is featured in the Face of Our Time exhibition, on view at the University of Michigan Museum of Art, November 12, 2011 through February 5, 2012.

Correction: Helen Zille is no longer Mayor of Cape Town. She now serves as Premier of the Western Cape.